The latest update version brings ‘voice message lock’ feature for the app that lets a user lock the voice recorded message before sending. Adding to that, this feature is designed to let the users record voice messages without having to hold mic button for entire time they’re recording.

There is a confirmed report that WhatsApp has been working on to add the feature that lets you play voice messages before sending it to your receiver.

The voice message recording lock feature on WhatsApp beta version for Android is similar to the attribute that was provided to iPhone users since December 2017. It was reported that WhatsApp had tested the message lock feature internally last year.

Earlier the user needed to hold record button the entire time till he completes recording voice and then slide it to send the message. People can get rid of it by exploiting new Android WhatsApp beta version. To get this feature, the WhatsApp Android beta testers should have a device of Android version 2.18.102 or higher. To lock the recorded voice message you need to swipe up the screen till you’re shown the lock symbol on the screen. When the lock symbol appears, it automatically means that the voice message has been locked.

The recorded voice will be there in the send message bar. If the user doesn’t like to share the recorded message, he/she has the option to ‘cancel’. In case, the user wants to send the recorded voices message, they can just hit send button, which is green in color right next to the cancel button. 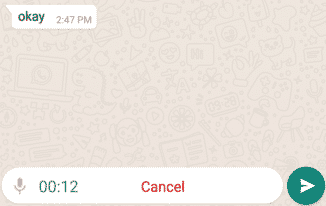 How to Get WhatsApp  Lock Voice Message

The procedure is as simple as installing an Android app. WhatsApp users need to sign up to become the beta testers from the Google Play Store. All you need is go to WhatsApp’s page on Google Play Store and scroll down, then you will find the button to sign up to become a beta tester. Hit the ‘Yes’ pop up to successfully enroll in to the beta program. Voice message recording lock option will be available in sometime after the server approves you. Users also have the facility to quit the beta program whenever they wish.

People from WABetaInfo reported that WhatsApp is developing a feature to listen to the voice message before sending it to a contact. In addition to that, it’s also focusing to provide a feature that lets you know the size of specific stickers before downloading them. Keep tuning here to get the latest updates WhatsApp tips and tricks.