Vivo V7 plus was launched in September, 2017 and since then it has been one among the most popular phones in Indian market. Vivo, like many other Chinese mobile phone brands has already established their phones in the India, targeting the middle class population.

Vivo manufactures android phones that are in the low-mid price range. This is obviously a huge plus point over the Indian market, considering the fact that Indians are slowly getting into smartphones. However, considering the huge number of people this market consists of, even this slow transformation can lead to rapid sale. Vivo V7 plus is one among those phones which are targeted mainly towards middle class Indians aspiring to get an all-rounder phone for a decent price.

Vivo V7 plus price starts at Rs 19, 599. It has a screen of 5.99 inches which is pretty big, with a resolution of 720x 1440 pixels. That sounds decent, doesn’t it? Also, the phone has a 3225mAh battery which is impressive. However, the battery cannot be removed by the user, which really cannot be considered as a disadvantage. Let’s just say that if you’re buying this phone, it won’t ditch you until the end of the day even under moderate use.

Before we get into more of V7 plus’s features, let’s take a look at its specifications in the following table.

Specifications of Vivo V7 Plus 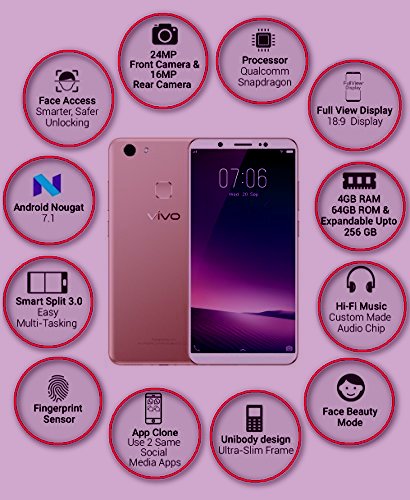 From the above table of specifications, you would have understood what the basic features of Vivo V7 plus are including Battery, Camera, hardware, and software. The phone has a 4GB RAM and is run by 1.8GHz octa-core Qualcomm Snapdragon 450 processor. The internal storage of V7 plus is 64GB which can be expanded up to 256 GB using a micro SD card. Vivo V7 Plus has Android 7.1 Noughat. It is a dual SIM phone in which you can insert up to two Nano SIM cards.

Say no to scratches! the screen of V7 plus is protected by corning Gorilla glass 3 with 2.5D curved glass which will prevent you from getting a heart attack if the phone slips away from your hands. It has an amazing finger print sensor that will detect your finger print within 0.2 seconds, every time you unlock your phone.

When it comes to camera, the phone is worth the money you pay for it. It has a 16MP primary rear camera, and a 24MP secondary front camera for those crystal clear selfies. If you’re a person who loves to click selfies, this phone is tailor-made for you. If you’re addicted to photo and video sharing platforms like Instagram and Snapchat, this phone is going to get you a lot more likes than usual for sure.

The phone supports 2G, 3G, as well as 4G and performs satisfactorily. Proximity sensor, Accelerometer, Ambient light sensor and Gyroscope are the different types of sensors present in the phone. The general features and exceptionally great camera performance doesn’t fail to impress anyone. Now, let’s take a look at the flaws of this phone that may disappoint you.

Vivo V7 Plus is a good camera phone with an exceptionally great selfie camera. It delivers satisfactory performance, but not one up to the expectations considering the price range of the phone. This is because of the processor of the phone which should have been something of a higher level. Even though it doesn’t have a bad battery, it could have been better. If you are conscious about the way your phone looks in your hands, this phone may disappoint you.

You cannot really say that the phone is good value for money, but if you are looking for a phone that captures the best kind of selfies, it is value for money. After all, the utility of anything is subjective and what may be value for money for one person, may not be the same for another person.

If you found our article useful, let us know in the comments section below. Have you used Vivo V7 Plus? If yes, then share your user experience in the comments section so that we can initiate a discussion over the quality and value for money of the phone. Follow trickideas.com for more updates, news and reviews on latest phones, laptops, and other gadgets.

Also read Which is the Best Samsung phone under 15000 Rupees?