Nokia 6 Android Phone: Hey Guys, The all the Rumors about Nokia Android Phones has come to an end today. We had already shared post about Nokia’s Upcoming Nokia Edge and Nokia NX phones for 2017. But Today Nokia has Launched their 1st fully Android SmartPhone called Nokia 6 Android Phone in China. This phone is really an amazing phone with 5.5 inch 1920 x 1080 FHD screen. The Phone runs on Android Nougat 7.0 OS and has 4GB RAM along with 64GB Internal Storage. 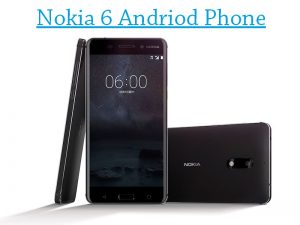 This Phone has been decently priced at around $245 which targets a Mind Range phone category. The high quality display is beautifully wrapped in 2.5D Gorilla Glass. Nokia 6 Android Phone runs on 3000mah Non-Removable Battery. This Nokia 2017 has a Unibody built using 6000 series aluminium which makes this Smartphone look really astonishing. Nokia 6 also supports dual sim which will surely give users a hinge to buy it.

Not only this Nokia 6 Android Mobile home button has an embedded fingerprint scanner, which is something similar to iPhone 7. It also has a 16 megapixel rear camera with phase detection auto focus and dual flash. And for selfie lovers, Nokia 6 gave a high quality 8 megapixel front camera. The music lovers will also feel good by its louder sound because of Dolby Atmos tech with ‘dual amplifiers’.

Nokia 6 is currently launched only in China and company says that they have No Plans to release it in other Markets. This looks like a bad news for people if India as Indian really love to use Nokia phones. Maybe, the company is trying their Nokia 6 in China first and then launch some similar phone in other markets.

Nokia 6 Android Phone can only be bought in China and not in India. However, I believe Nokia 6 will be available in India by exporting it from China. But in that case the warranty of the phone gets voided and it has other drawbacks aswell.

But it is a good news that, Nokia 6 is the first step for the Nokia brand into Android smartphones with more phones to come in early 2017.

Some of the key features of Nokia 6 Smartphone are:

Below are all the specifications of Nokia 6 Smartphone which will really amaze you.


You can easily buy Nokia 6 Mobile phone just by following the below steps:

Note: Just Click on the Red Bell below, to get updates about Nokia 6 in India.