– As you all know, Prime Minister Narendra Modi has announced New 2000 Rupees Note. Also, the other major announcement made by PM Modi on 8th October 2016, is that the notes of Rs 500 and Rs 1000 denomination will be cease to hold any legal tender from Midnight November 9. 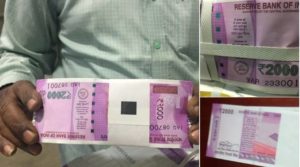 New 2000 rupees notes will be letter “R” series bank notes. New notes will be made publicly available from 11 November 2016. All the decisions regarding the new Indian currency notes has been taken by Indian RBI Governor Mr. Urjit R. Patel. Not only this, these new notes has some really advanced technology in them about which I will share the details in this post.


According to the Govt. Authorities, Using Rs. 2000 will let people carry lesser hard money. This will ultimately drive people to use more plastic money i.e. Credit card or debit card or e-wallets like Paytm, Freecharge and Mobikwik.

With New 2000 rupees note come a new design of Indian currency. The new design of the note entails Pink colour layout. As you can see in the below image, the new note has a a printed Mahatma Gandhi in the Front and Mangalyaan on the back side of the note. These amazing new notes will be issued by Reserve Bank of India (RBI) with effect from 11th November 2016. The new ₹ 2000 denomination notes has letter ‘R’ which became the official symbol of Indian currency. New 2000 Rupees Note bears the signature of Dr. Urjit R. Patel, the recent Governor of Reserve Bank of India.

Some Key Identity of 2000 Note

Reverse or Back Side of the Note :

The back side or the reverse side of the new rs 2000 note is completely different from the front side. Their are various logical message like cleanliness and technological advancement on the back side of the note. Let’s have a look :

What Is The Technology Used in New Notes ?

Trick Tip: You must have also heard that the new rs 2000 notes will have an embeded GPS system. But I would like to tell you that their is no such technology used in the new notes and it was just a Rumor.

Well all know Rs. 2000 note will be the highest value denomination note ever issued by Reserve Bank of India (RBI). There are some benefits of new 2000 rupees note, so I’m going to list them below:

New Rs.2000 notes will be available from 11th November 2016 all over India. Government has already printed the notes and have asked for two days to circulated them to the banks. Government has decided few places where the new bank notes will be widely available. Just have a look below, so that you do not have any issue to get new currency notes.

Video Description: In the above video you can see our beloved Prime Minister, Narendra Modi giving the speech. In the speech he address about the new Rs. 2000 value notes being introduced in Indian economy.

You can also have a look at https://www.rbi.org.in/ to know about more information on Indian govt. website.

How Can I Save My Existing Money ?

First of their is No need to panic, unless you have huge amount Black Money 😀

You can just follow the below steps to save your existing Money:

What Happens To Other Value Notes ?

Hope you like this post. Moreover,If you have any specific question about New 2000 rupees note or query just ask the question in the comments below and I will surely reply you with an answer. 🙂