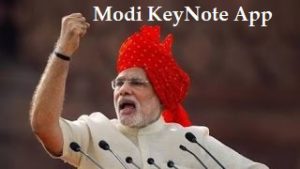 After Demonetization of Rs 500 and Rs 1000 notes their has been a lot of viral and sometimes fake news has flooded out Whatsapp and Facebook. But We here at Trickideas.com share only the genuine news details. PM Narendra Modi has also announced that New series of Rs 2000 notes will be brought into Indian Currency.

So, Here we have an App Called Modi KeyNote App and some people also call it Modi Ke Note App. Their are a lot of questions that our users have asked about the newly2launched “Modi KeyNote App”. So, I will try to answer all the possible questions that I could. If I miss something, just feel free to comment below with your question or suggestion.

Also, Modi KeyNote App is only available at Google Playstore. Hence, Only Android Smartphone users can use this app in their phones.

Can I Use Modi Keynote App To Know Whether Note is Real or Fake ?

First of all I would tell you that this Modi KeyNote App is just for FUN and does have any real significance. This is the most common question that people as about Modi Key Note App, that if this Modi Ke Note App can really tell if Rs 2000 or Rs 500 Note Genuine or Fake?

You must have seen messages about this app on Whatsapp and Facebook. These messages are like “Guys, you’ve seen Modi Keynote App. After downloading the app, When you’ll scan a Rs 2000 or Rs 500 you will see PM Modi speeches on Black Money”. “Guys, Just Download the Modi Ki Note App and you will see our Prime Minister speeches against Black Money”

Hence, Modi Ke Note App is not intended to tell the difference between the Real and Fake notes. This app is just for fun where you can scan new Rs.2000 notes. And you can watch speeches of our PM Modi on the KeyNote App.

How To Use Modi KeyNote App ?

As, I have already told you that you can use Modi Ki Note App only for Fun and not to know the Genuineness or Fakeness of the New Note. If you want to know how you can download this app and use it, then just follow the below steps.

Trick Tip: I would again like to tell you that Modi KeyNote App is just Fun Intended and does not tell the difference between real and fake currency notes.

Video Description: The above video gives the information about Modi KeyNote App. Just have a look to see how this app look and works.

Here is another important

thing that you should know about Modi Ki Note App. This app has not been launched by Government of India. Modi KeyNote App has been designed by Bara Skull Studios and they have not tie up with Indian Government. This App was launched on 11 November 2016 and by far has reached around 3 Lakh Downloads. As per their play store description, Bara Skull Studios just want to share the kind words of our PM Modi to fight against corruption.