From the OnePlus 5 and LG V30 to the iPhone, the new Galaxy Note 8 faces some stiff competition. But for Samsung fans, the biggest decision will be whether to get the Note 8 or turn to Samsung’s other top flagships, the Galaxy S8 and Galaxy S8+. Therefore, we bring to you an in-depth comparison, i.e. the Samsung Galaxy Note 8 vs Galaxy S8.

The Note 8 is certainly similar in some ways to the S8 and S8+, sporting a curved Infinity Display that goes from near edge to edge, as well as a pressure-sensitive home button and a back-mounted fingerprint reader.

But it’s the differences between these two flagships that make this comparison a lot more interesting.

Now that we have an idea about the specifications of both the Samsung Galaxy Note 8 and the Galaxy S8, it is time to discuss the differences in greater detail for better understanding and a wiser judgment when purchasing.

The Samsung Galaxy Note 8 follows a similar design path to the Galaxy S8 but with a couple of tweaks. Being a Note device, the design needed to cater for a built-in S Pen so the Note 8 is slightly wider than the S8 at 162.5 x 74.8 x 8.6mm and heavier too at 195g. 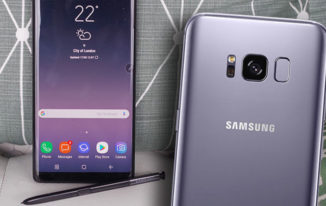 The Bixby button that debuted on the S8 and S8+ is also present on the Note 8, making the three devices very similar. What distinguishes the Note 8 from the other two flagships, aside from the S Pen and size is dual-cameras on the rear.

The 5.8-inch and 6.2-inch Super AMOLED display on the Galaxy S8 and S8+ are truly stunning. But if you want an even bigger canvas, the Note 8 has you covered. The Note 8’s 6.3-inch screen is the biggest in Samsung’s current lineup, making it ideal for getting lost in movies or getting serious work done with the included S Pen. 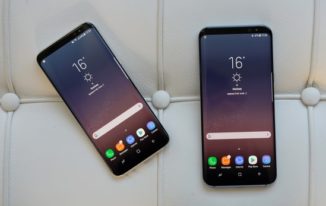 In addition, the Note 8 lets you do more with its additional real estate. Thanks to a new App Pair feature, you can launch two apps simultaneously side by side, such as the Browser and YouTube, or a music app and Google Maps. The S8 has a Multi Window feature of its own, but you have to launch the two apps separately.

The Samsung Galaxy Note 8 comes with dual rear cameras, that are situated in a horizontal alignment and they consist of two 12-megapixel sensors, one wide-angle, one telephoto. The wide-angle camera has an aperture of f/1.7, while the telephoto sensor has an aperture of f/2.4 offering 2x optical zoom and both have dual optical image stabilization. In terms of the Note 8’s front camera, it offers an 8-megapixel sensor with an f/1.7 aperture autofocus lens and it includes iris scanning capabilities. 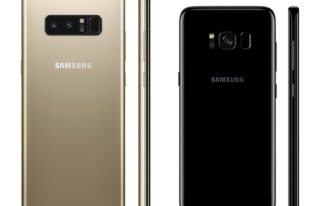 The Samsung Galaxy Note 8 unsurprisingly comes with the latest hardware, which is either the Qualcomm Snapdragon 835 platform or the Exynos 8895, depending on the region. Samsung has increased the RAM to 6GB, as well as storage capacity options to 64GB, 128GB, and 256GB. MicroSD is also on board.

The Galaxy S8 also has either the Qualcomm Snapdragon 835 platform or the Exynos 8895, depending on the region, coupled with 4GB of RAM, which means the Note 8 is likely to have a slightly improved performance compared to these two devices thanks to the extra RAM. The S8 has 64GB of internal storage with microSD support for storage expansion, so fewer options to the Note 8. 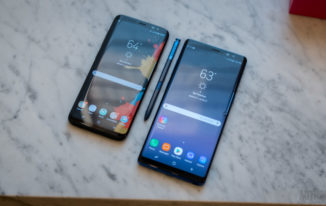 The Samsung Galaxy Note 8 launches on Android Nougat with Samsung’s TouchWiz over the top, just like the S8 and S8+. The experience between the devices is quite similar, though there are a few additional features on the Note 8.

The new device will allow for app pairing, where users will be able to open two apps at the same time, as well as something called Live Message that will turn drawings into GIFs. There will also be Screen Off Memo and a Translate feature that will translate sentences with a hover.

The Galaxy Note 8 costs between $930 and $960 (depending on your carrier), retaining the Note line’s reputation as the priciest member of Samsung’s lineup. By comparison, the Galaxy S8 debuted at about $750, though you can find better S8 deals, especially if you go the unlocked route.

The Samsung Galaxy Note 8 has a similar design to the Galaxy S8 and S8+, but with a slightly wider and taller stance to accommodate the S Pen, along with the slightly larger display. It also features dual-rear cameras compared to the single lens on the S8 and S8+. 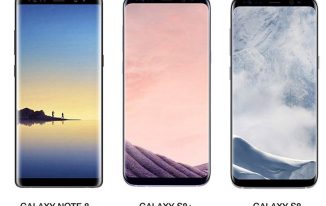 Between its excellent dual-lens cameras and S Pen features, the Galaxy Note 8 is worth the nearly $1,000 price tag for Android enthusiasts who want the absolute best of the best. On the other hand, the Galaxy S8 is the better value who want Samsung’s great image quality, display and immersive Infinity Display for less.

Ultimately, the Samsung Galaxy Note 8 brings all the latest features and functions from Samsung, but you’ll pay a price for it and not everyone will want the S Pen features or the new software functions in which case the S8 or S8+ might be the better option.