Since the launch of Apple’s newest OS, the iOS 11 people have been complaining about the battery life decreasing. While the newly launched iPhone 8, iPhone 8 Plus, and iPhone X are untouched by these battery problems, older phones tend to have a battery issue with the newest update. After getting many complaints, Apple launched the new version of the iOS 11 update which is iOS 11.0.1 that appears to fix the battery problems. However, if you’re still facing the still experiencing battery life issues, here are a few battery saving tips you can take to make the battery of your iPhone last an entire day.

Identify the apps that draw most power 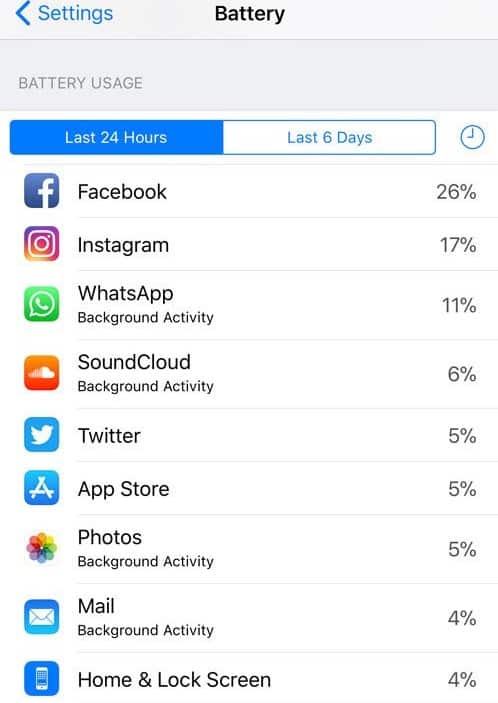 Turn off the background app refresh

This is one of the most important battery saving tips for an iPhone user. Generally, most of the apps use cellular or WiFi data in the background to keep refreshing the content regularly. This in turn adversely effects your iPhone’s battery life, even when you’re not using the phone. This feature is useful for apps sometimes; however, there are many apps, like shopping apps that use this feature as well, which is unnecessary. You need to stop these unnecessary apps running in the background to save your iPhone’s battery. To change this setting all you need to do is just go to Settings -> General -> Background App Refresh, then deselect all the apps that you don’t want to run in the background. 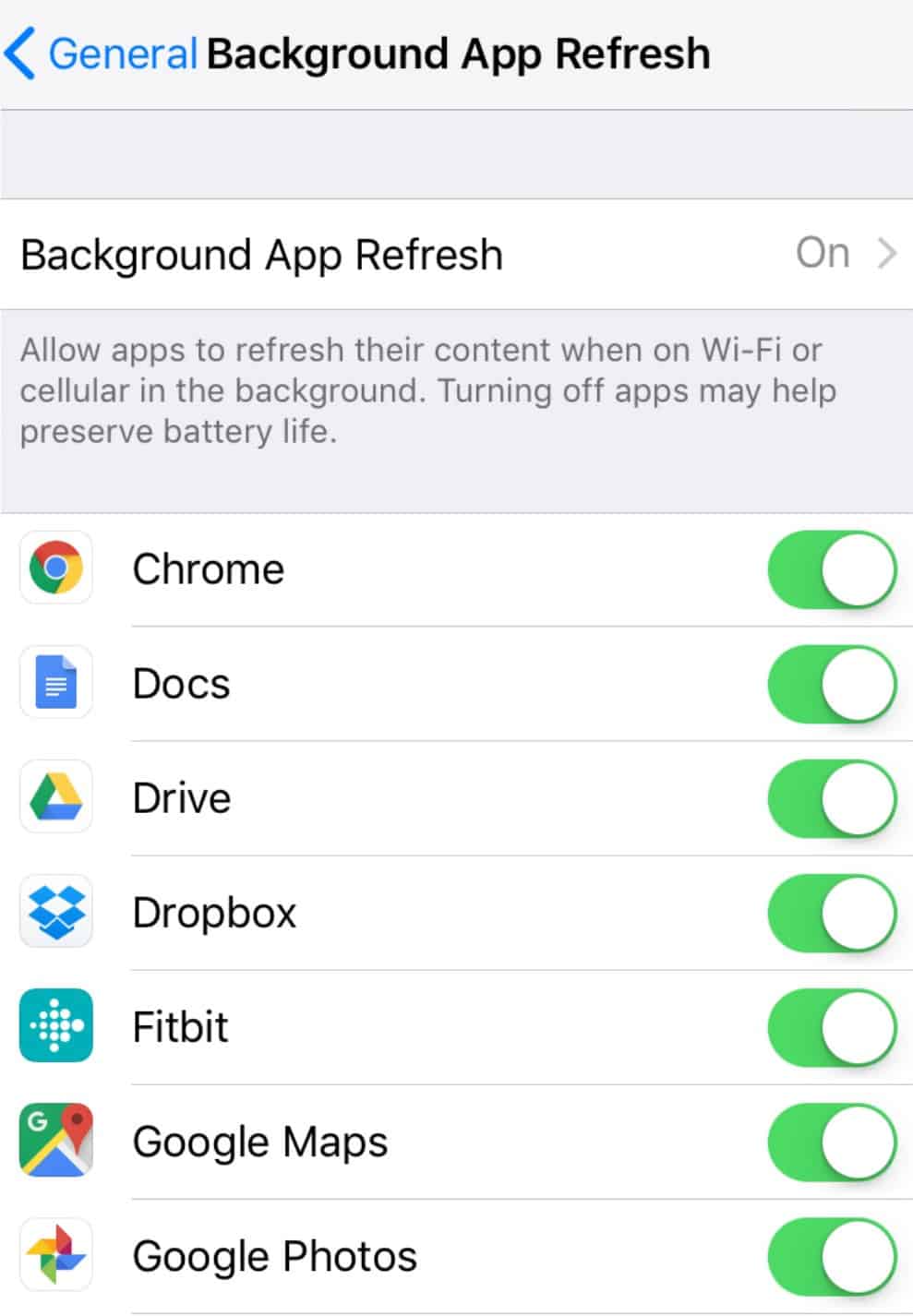 Turn off the Raise to Wake feature

iPhones now have the ability to automatically switch on the display when picked up from a resting position. Now think how many times do you pick your phone up from a table or out of your pocket even though you needn’t use your phone. This might result in the battery draining faster because of the display switching on several times a day. To save the battery of your iPhone, it’s recommended that you turn off this feature. All you need to do is go to Settings -> Display & Brightness and then turn the Raise to wake feature off. 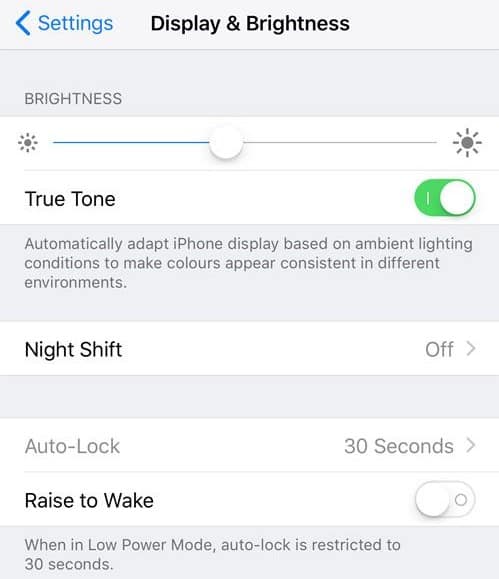 Assistive Touch is a feature that helps people who have difficulty in touching the screen. This feature is automatically on when you update your iPhone to iOS 11 or more and this drains most of your phone’s battery. If you don’t need to use this feature all you need to do is just turn off this feature. Go to Settings -> General -> Accessibility -> Assistive Touch and turn it off.

One of the most important battery saving tips that you need to consider is controlling the use of location services. The location services use the GPS which come in handy when you use maps. In addition to the Maps, there are many other apps that use the location services of your iPhone to display ads, record your present location, suggest new places, and many other things. This is why it’s suggested that you use the location feature whenever required, like using maps or finding traffic updates. In addition, you can also use the feature called “while using” for apps, which basically means that the apps will only access the location when you have them open. Go to Settings -> Privacy -> Location Services and change the settings as per your needs. This will make sure that the battery stays for a longer period of time. 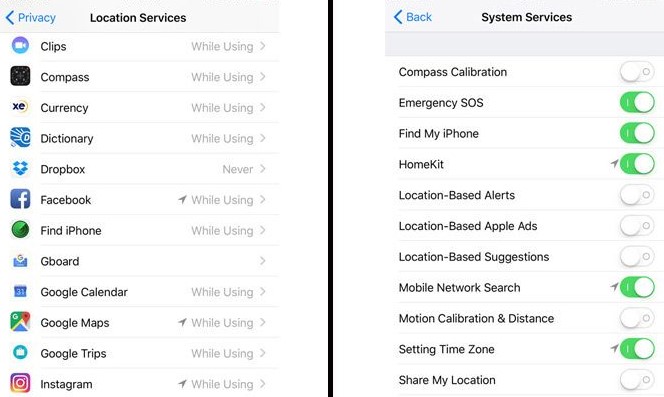 You might be used to switching off Bluetooth and WiFi radio signals from the Control Center. However, in iOS 11 the shortcuts do not entirely switch off the feature as it merely only disconnects you from the network. This is because Apple wants accessories such as the Apple Watch and Apple Pencil to remain connected and leaving these wireless settings on would solve that problem. However, this consumes a lot of battery and if you want to save your battery, you will need to turn each of them off manually from the general settings.

If you get lots of emails and they’re constantly being pushed to your phone, your battery is going to suffer, no matter what version of iOS you’re using. However, you can modify the fetch times of the emails very easily which will save battery. All you need to do is head to Settings -> Accounts -> Fetch New Data, and now you can change your email update schedule from push to ‘fetch’, which basically means your phone will check for new emails only when you tell it to, reducing the amount of battery it uses by updating itself all the time. You can change it to every 15 minutes, every 30, hourly or ‘manual’.

This is perhaps the most easy battery saving tips that you could use in your iPhone. All you need to do is just turn on the battery saver feature that’s already present in most of the iOS versions. Turning it on reduces most of the activities that can cause your battery to drain. It’s almost like the Airplane Mode but without stopping your network services. To turn on this feature go to Settings -> Battery, and turn the battery saver mode on.

These are some of the efficient ways to save the battery on your iOS 11 run Apple device.